i have been having fun making up samplers for some of my friends
they say "what should i have?" and i get to play dictator!
it works for me, and so far they say i haven't yet steered them wrong
so it appears to be making everyone happy!

she said it was so good jackie decided to have it too
and i put a second sampler together for stacy:
howe sound high tide hemp and honey ale
howe sound rockfish red ale (she insisted on having this again!)
upright brewing seven
lost coast great white
and she liked all of those as well
woot - i rock! 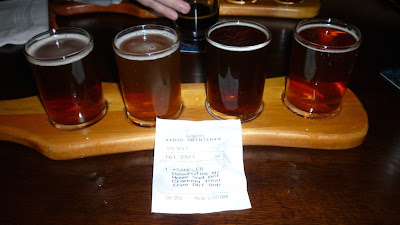 my sampler was:
tree brewing double hop head ipa
st a's says: 8% loaded with five different hop varieties, this bold imperial ipa is not for the faint of heart
i say: i really like it

deschutes mirror pond pale ale
st a's says:  5% the quintessential american pale ale, mirror pond elegantly blends the sweetness of malted barley with the bit of hops
i say:  lovely as usual!  less hoppy than the others in my sampler (duh, its a pale ale not an ipa) but it sure can hold its own

crannog ales insurrection ipa
st a's says: 5.4%  100% organic.  pale amber malt body emphasizes, with enough sweeness to hold up the rather large volumes of fresh hops
i say:  pretty good, how good oscillates wildly depending on what i drink before it

howe sound pothole filler imperial stout
st a's says:  9%  this beer is a strong, inky dark ale, brewed with 6 malts and blackstrap molasses.  it is a thick beer, with an intense roasted barley flavour, with notes of chocolate and licorice
i say:  i think i got the wrong beer - my sheet said it was the right one, but there's no way the light brown beer is the pothole filler.  i wish i knew which beer i got instead though, cuz its lovely!