- July 10, 2013
my notes from last night's beer column on cbc radio's on the coast with stephen quinn:


A couple of weeks ago CBC received a e-mail from a listener, Dave Price from Maple Ridge, directed to me, their Craft Beer Columnist
"I am looking for a great wheat-free ale that is very "Hoppy". Sadly, I cannot handle my old favorite "Hophead" because of the wheat.
Perhaps I can buy hops and add them to my wheat free ale?"


And here's my response:
India pale ales, or ipas, aren't supposed to have wheat in them. The four ingredients of beer are water, hops, barley and yeast. There are wheat beers, like hefeweizens and wit beers, which are supposed to contain wheat. When other beer styles, that aren't specifically wheat beers, contain wheat we refer to that as being an adjunct ingredient.

Often macrobrewers will use adjuncts to save on ingredient prices, adjuncts like wheat or corn or rice, which are less expensive than barley. Adjuncts can also be used for colouring - if you malt or roast some of the grains you can darken the colour of the beer. Using rice and corn can lighten a beer's colour - Budweiser would be an example of this. Local craft brewery Parallel 49 use "burnt to a crisp" wheat to add colour to their Gypsy Tears ruby ale.

Sometimes a little bit of wheat can also be added to aid in head retention - i.e. keeping a nice white head on your beer the whole way through, not just at the pour.

Wheat malt may also be used when propagating yeast, so though it may not be in the recipe of the beer it can get into it this way.


I think the only way to 100% guarantee that there is no wheat in a beer would be to certify it gluten-free. I'll be talking about gluten-free beers and the various methods of keeping gluten out of beer in another segment, so I won't go into great detail here, but if there is wheat present at any stage of brewing, going all the way back to obtaining supplies and ingredients, there is always the chance some small amount of wheat could get into the beer. Hopefully the tiny amounts wouldn't make anyone's allergies react. But if you're having a reaction, find another beer to drink!  Good thing there are so many great ones out there.


I checked in with some local brewers and am informed that none of these beers have any wheat in them:
Driftwood Brewing's Fat Tug
Parallel 49's Hopparazzi and Lord of the Hops
Tofino Brewing's Hoppin' Cretin
R&B Brewing's Hoppelganger

As for adding your own hops to wheat-free beers, I suggest trying hop oil rather than actual hops - no muss, no fuss, just bitter goodness.  You can find hop oil at various places that sell essential oils and also at Dan's Homebrewing on East Hastings Street (they currently only have one vial in stock, but are expecting another shipment in soon).  Just a wee couple of drops will do it.  I know people who take hop oil with them to sporting events where good beer is hard to come by - just a drop of hop oil and those flavourless lagers suddenly have some punch!

Feel free to send in your questions, I'll answer them!  E-mail onthecoast@cbc.ca

There is a whole lotta exciting stuff going on the world of craft brewing this week:

A new publication - BC Craft Beer News - launched its first issue this past weekend - and I have a column in it - check it out!  You can find copies at various craft beer places around town, or contact the publishers to get a subscription by mail (julia@bccbnews.ca);

Tuesday night the city council voted on beer lounges. If it passed you will see more tasting rooms opening in the City (UPDATE:  IT PASSED!!!);

And, from the long list of breweries in the works, two are on the verge of opening:


33 acres in Vancouver has delivered its first kegs to The Alibi Room and St. Augustine's, of their beers "33 acres of ocean" a west coast style pale ale and "33 acres of life" a lager/ale hybrid in the california common style. they'll be distributing to other vancouver area establishments in the coming weeks and expect to be filling growlers in the tasting room at 15 west 8th avenue in a week or so.  And their growlers are the prettiest ones I have ever seen. 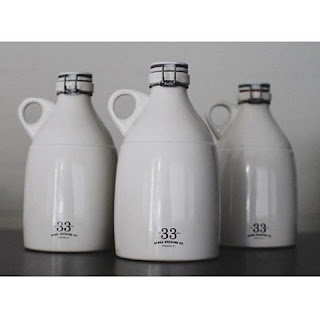 Deep Cove Brewers and Distillers in North Vancouver is having its grand opening on July 19th. With beer available to start, spirits to follow. Deep Cove beer has also been featured at several beer festivals this season, such as the Camra Spring sessional, the Central City summer cask fest and last weekend's Hopoxia at Phillips Brewing in Victoria. If you can make it over to the opening, they'll be open from 11:30 am to 9:00 p.m. at 2270 Dollarton Highway for tastings, growler fills and tours. The first 25 people through the door will receive a free growler.  Deep Cove is brewing three year-round beers to start with, the "quick wit", a wheat ale; "loud mouth" pale ale; and "wisecrack" west coast lager.  Currently available in kegs only, they expect to be bottling by August.  And their bar is the sexiest one I have ever seen. 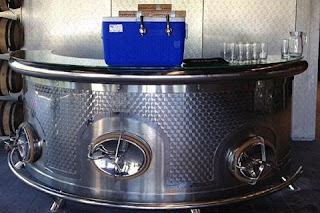